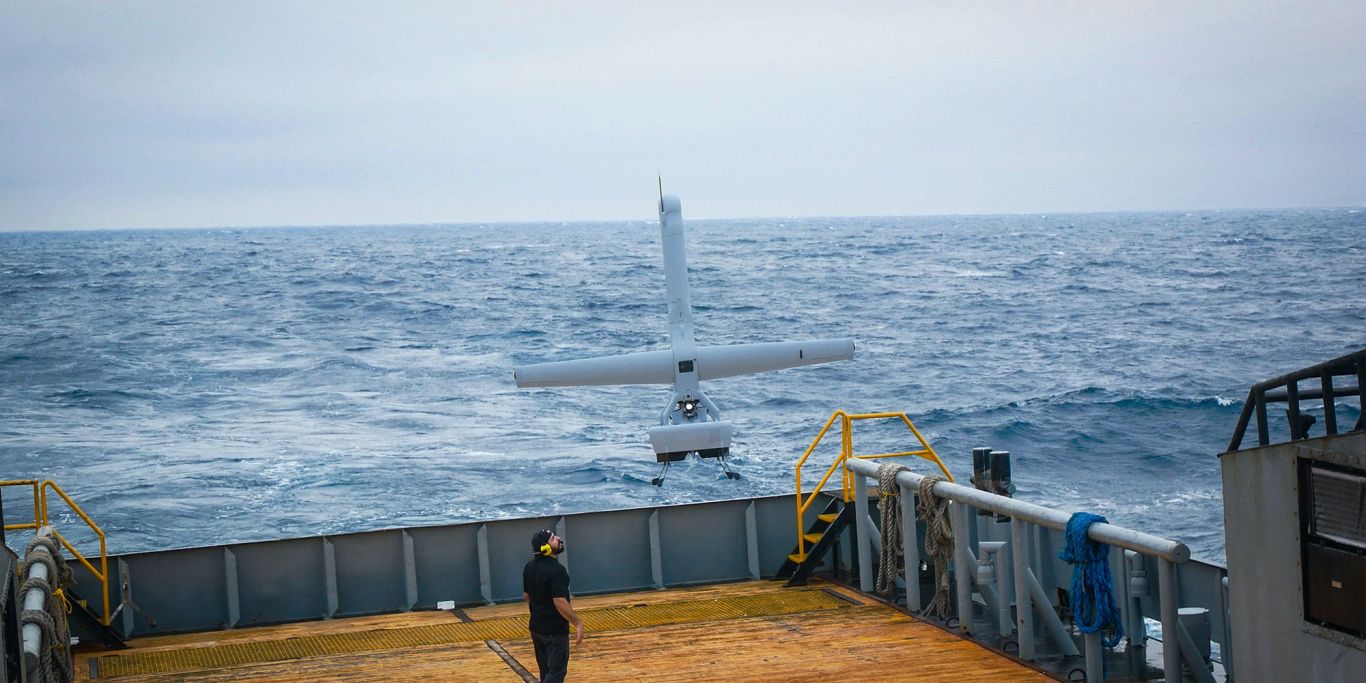 Written by Kongsberg Geospatial on

The Canadian Coast Guard is conducting trials of the long-endurance Vertical Take-of and Landing (VTOL) UAS surveillance system for possible deployment on Canadian Coast Guard Vessels under a project funded by Defence Research and Development Canada (DRDC). The Shield AI V-BAT aircraft was selected due to its unique ability to combine VTOL from the small confines aboard ship with the long endurance of a fixed-wing aircraft while carrying multiple sensors.

Kongsberg Geospatial teamed with Shield AI to deploy the V-BAT VTOL UAS for a 3-day sea trial in international waters in the Gulf of Mexico. The trials tested the capability of the aircraft to provide rapid launch and recovery, long endurance, and confined space take-off and landing from a moving vessel in a variety of weather conditions – both during the day, and at night. In addition to tracking and identifying other ships at long ranges, the flights conducted a variety of simulated missions designed to emulate real-world situations where the Canadian Coast Guard would use the drones. These included locating and tracking dye patches that simulated wreckage or oil spills, and locating life preservers in choppy seas and in a variety of weather conditions.

The V-BAT operators used Kongsberg Geospatial’s IRIS UxS software to safely pilot the aircraft at long ranges from the launch vessel. The IRIS software provides a comprehensive situational awareness picture of the operational airspace, data from a variety of sensors and data feeds – and shows the location of other aircraft and surface ships, as well as the launch vessel and the “ownship”, or drone being operated.

Sensor data feeds from the cameras and sensors carried by the UAS were ingested, at real-time, into the Kongsberg Geospatial Modular ISR Data Analysis and Storage system (MIDAS). The MIDAS system records video and other data from the UAS, and serves as a “mission intelligence coordinator” to view current and historical sensor feeds of the UAS within a temporal and geospatial context to increase sensor utilization effectiveness.

“While the sea conditions were perhaps a little rougher than expected, they were ideal for testing the launch and recovery capabilities of the V-BAT from a small ship under the kind of conditions you might expect during real operations”, said Rex Hayes, a retired US Navy and Coast Guard officer and the Director of Unmanned Systems at Kongsberg Geospatial. “We were also very pleased with the performance of IRIS and the MIDAS system when handling integrated sensor data feeds from extended missions”.

Trials like these are important to the continued health of the industry, according to Brandon Tseng, Shield AI’s cofounder and former U.S. Navy SEAL. "We love supporting our allies. It will take strong partnerships – technological, military, and economic – to maintain stability during challenging times. Sharing tech like the V-BAT strengthens strategic relationships and contributes to global stability. Our recent engagement with the Canadian Coast Guard and Kongsberg exemplifies our commitment to ensuring our allies have the cutting-edge technology and products they need!”

Build Your Own Multi-Domain Display with TerraLens®

Build Your Own UAS Control System with TerraLens®

Build Your Own Counter-UAS System with TerraLens®

Build Your Own Counter-UAS System with TerraLens®

About Shield AI Shield AI is a venture-backed company built around a team of proven executives, warfighters with relevant national security experience, and world-class AI engineers. The company is headquartered in San Diego, CA with satellite offices across the United States and abroad. Shield AI’s products and people are currently in the field actively supporting operations with the US Department of Defense and allies. The V-BAT, with its innovative, near-zero footprint vertical take-off and landing (VTOL) and long-endurance capabilities, is unlike any UAS on the market. Propelled by a single, ducted, thrust-vectored fan, it takes off and lands in the style of a SpaceX rocket. Its fully operational logistical footprint fits into the bed of a pickup truck or inside a Blackhawk helicopter, significantly reducing the total cost of capability. U.S. and international customers view the V-BAT as a flexible platform capable of performing Group 2 UAS to Group 4 UAS missions and beyond. For more information visit: shield.ai